Photo of the Day 9

This shot is called "That spooky damn clown" This was a fun shot, even though the shutter was only open for just less than  a min, this shot probably took about 4 hours out of my life, but I don't think they where wasted, I like this shot I guess mainly for the technical challenge it presented, I had to make up a jig that would allow me to spin a fixed light in all directions, to make the sphere of light.  Making the marionette seem like it was in the middle of the sphere, was a trick, especially when the puppet and the light sphere were about 4 feet apart, if I had put the thing in the physical center of the light, it would have looked very small, so it needed to be closer to the Camera for the scale.  The process to make the shot was, set up the marionette, focus and open the shutter, the camera was on 'bulb' setting, this means the shutter stays open as long as the shutter is pressed, the room was dark so no light going in even though the shutter is open, I had two speedlights/flashes already set up, one for main set low, looking up at the subject to give it the slightly sinister look, the second was to stop the shadows caused by the first being to severe, that exposed the puppet onto the sensor, with the room back in darkness, shutter still open, I then had to move the puppet out of the shot, if he stayed put the light lines would not have appeared to be in front of it, then I could form the sphere, with the light jig I have made.  Simple as that, I am thinking of making a variation on this theme for next Photo of the Day stay tuned.56sec shutter speed, f11 ISO 100 and a 'nifty fifty' lens, shot on the Canon 5d mk3 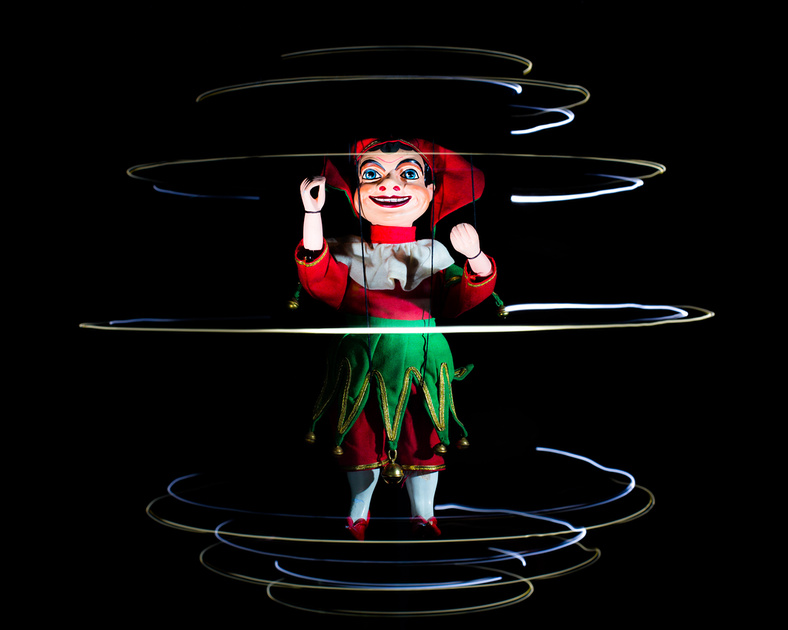