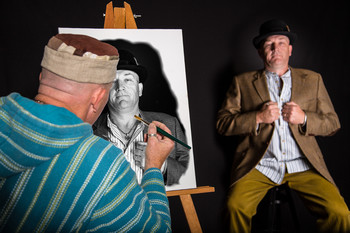 Born in Banbury Oxfordshire, England, back in 1964...a military child, who had a yearning for roots and a home, but alas got potted and moved around at the whim of the British Army. As a child, I lived in Hong Kong, Singapore, and Cyprus, in addition to various locations in Germany and England. To avoid interruption in our education, my Dad thought it would be best to get both me and my younger brother Ian into a boarding school. Apley Park Boarding School in Bridgnorth, Shropshire was the lucky institution to get us. My older brother Mark stayed in Germany with my parents. Apley was a school of 150 pupils, 12 teachers and absolutely no anonymity. Everybody knew you; consequently one could get away with nothing.

After school and a brief, unfulfilling engineering apprenticeship, I joined the 5th Royal Inniskilling Dragoon Guards of the British Army. It was an Irish regiment. I drove and crewed a Chieftain tank for the next 3.5 years, with a brief foray into driving the ferret scout car. I decided that the army was just to weird to keep me, after seeing a grown man being shouted at because he had an insect land on his hat at a show parade. He missed his train home that weekend because the Sergeant Major wanted to see him at the supplemental show parade later that evening, with the insect removed from his hat.

My life post Army involved finding a niche for my burgeoning creativity. I didn't enjoy working with metals, too dirty and unforgiving, So a carpenter I became, building and installing bespoke kitchens, bathrooms and bedrooms. I got married, had a child - Tom, and got a divorce. Married again, had another child – Ben. I remained self employed and married until a bout with Leukemia CLL. This sent my life on a bit of a tangent, what had meaning previously stopped having any import to me. I was told to make the most of the next five years 'cause that is all I had left. I think I was 28 at the time. I stopped being married, stopped being a father to either of my boys, and stopped working. I gathered what few things I really needed in a backpack and started traveling. I covered 20 or so countries, working here and there both as a carpenter and as a scuba diving instructor. My older brother, Mark, introduced me to SCUBA. I went on to be a recreational scuba diving instructor, free diving instructor, and technical diver on full mix for both open and closed circuit/rebreather diving. The stats people like to hear are my deepest dive – 400ft; my longest dive – 4 ½ hours; my deepest snorkel - 70 ft; and at my peak I could hold my breath for 4 ½ minutes.

After having a bone marrow transplant in 2002, I was sick of hospitals. Post-recovery, I moved to Grand Cayman, where I met and married my third wife, Claire. We lived through Hurricane Ivan, a monster hurricane that destroyed nearly all of Grand Cayman in 2004, and were evacuated back to the United States. After a short stay with the in-laws in Southern Illinois, we decided to move up to Chicago. We had an 800 sq ft apartment right between the Magnificent Mile and Lake Michigan, a great place for a year, but not good enough to keep us. We moved to Vienna, Virginia in 2006 when my wife was relocated for work.

I had always had the urge to take great photos but never got inspired until I got my first digital SLR camera with which I could explore that urge. What started as a curiosity has blossomed into a new career. In addition to exploring my artistic side, I do professional work including head-shots, corporate events, and specialty events (“bump” photos, newborn and young children photo shoots, weddings, food, pets, real estate, etc.)

All the lessons I have learned have been auto-didactically. I have received no formal training, and I think I prefer it this way. If I could give one tip about taking photos, it would be to slow down. Don't just take a photo. Make a photo.
© Photofortytwo Photography
Powered by ZENFOLIO User Agreement
Cancel
Continue